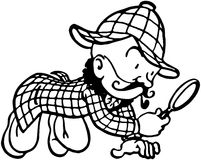 While we were lolling about, waiting for the baby to wake up no doubt, my eldest daughter said to me:

‘Dad, if you could have any job in the world, what would it be?’

It didn’t have to be a job that exists and there are no conditions that are preventing me from getting it. All it has to be is something that I wanted to do. I thought about it for a while and struggled to come up with anything. In the end I said:

‘I would like to be able to sit on the veranda and write.’

‘But you can do that anyway’ she replied.

Apart from not having a veranda to sit on, she was right. There is nothing stopping me from doing that right away, other than the fact that life gets in the way. I was clearly struggling to the point of dullness. The question then, like all imponderables, has been going around and around my head until yesterday. In a flash I now know what it is that I would like to be and that is a Forensic Political Analyst, indeed the lead FPA for the country.

What’s one of them I hear you ask? The job is to check every statement made by a politician to check for accuracy first and credibility second. I would be the arbiter of all political hype and spin. People would look to me as the lead authority on political truthfulness, at least within the United Kingdom and I would approach my role with vigour and robustness.

Every night I would be on the national news, admonishing this or that person. ‘Let’s go over to the Chief Forensic Political Analyst to verify whether what has been said today stands up to scrutiny.’ The Public would hang on my every judgement and politics would be more truthful for the better.

Well, she did ask.

One thought on “Political forensics”