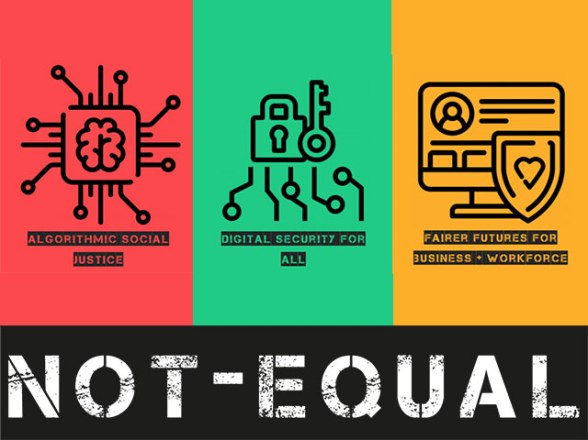 Somehow I got involved in a Virtual Community Panel for Not-Equal. How, I’m not so sure but perhaps from when I was involved with them as part of #CyberFest and the North East Initiative on Business Ethics.

Not-Equal is a network which brings together researchers, communities and partners from industry, public and the third sector organizations, to explore and co-create practical responses to issues of fairness and justice in technology design and its use.

All of these things are right up my street and so I was delighted to be involved. Although this happened in July I have waited to blog about it to allow the process to come to its conclusion, not that I wanted to write about the outcome but rather the process itself. It was certainly interesting and effective.

This is how it was sold to me: Not-Equal wants to fund research projects that are innovative and that also have meaningful social impact. For this reason research proposals will be reviewed by a panel of university academics and a panel made of people from non-academic communities—a Community Panel, who can offer their experiences and knowledge to the reviewing process.

There were four of us in Team A and I assume that there were other teams, unless we had been called this to feel special. The aim of the team was to get us to review a number of research proposals, yet to get there the organisers need to know  that we understood what was required of us and had the necessary skills in place. This is what the process was designed to do.

We met three times, online and we were given some homework to complete. The first session was an introduction to the process, asking us to review a fictitious proposal for the use of technology. We were asked to consider it from different standpoints but could make as many errors as we liked at this stage as there would be no consequences. The Only intention was to show us how evaluations work, or don’t.

At the second session we were given a real proposal, one that could have ended up being funded or not. We used the experience form session one to consider our proposals and discussed them with the rest of the team as a way of developing our understanding.

In the third session we were paired with one of the team to talk about our impressions of each other’s proposals and how we had evaluated them. Finally we were asked to submit our reviews to Not-Equal.

I have no idea whether the proposal I was given was successful or not, indeed my understanding is that sometimes they ayre returned to the authors to be rewritten but I do know that the process we went through was a success. By encouraging us to cut our teeth on something that did not matter, it gave us the confidence to address the real proposals better and with greater confidence.

I’m not sure when but someday I am going to put something similar into action.