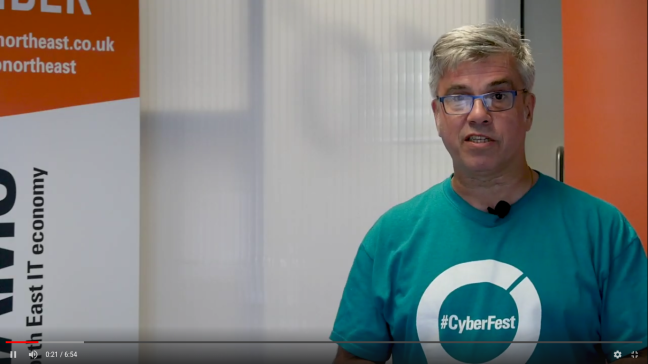 I’ve said it before and I will say it again, video is not my forte. There is something about standing in front of a camera that turns me into a blubbering wreck yet these days, if you want to promote anything then video is the only way.

I’ve been running a weekly series of ‘In Conversation’ throughout the summer, speaking to the great and good in the cybersecurity scene across the region. We are up to something like our fifteenth now and they are proving to be popular. I guess then this has helped me to get a bit more used to being on camera, even if it is recorded through GoToMeet.Me.

When Robert, who has helped me behind the scenes with these videos, asked me when it would be my turn to be interviewed I resisted until it came the time to promote this year’s #CyberFest. As I’ve already said, if you want to promote anything then video is the only way.

What with the dodgy weather, unsuitable for outside recording, and social distancing we made our way to the Dynamo office at Hoults Yard. Robert had all the necessary gear and over an hour or so we managed to record a few minutes of usable content. With my stuttering and fumbling as well as the banging of doors by other people in the building the ratio of good content to bad was low. There will be enough for some outtakes!

The resulting video is much better than anything that I could have done myself. Having someone on the other side of the lens who knows what they are doing was an enormous help. I also picked up a few tips along the way from Robert, always respond to a question by repeating the question, or at least its sentiment. In this way the question could be cut and the video would still make sense. Speak in short sentences, with decent gaps in between, rather than trying to get everything out in one rush. In this way you are less likely to forget what you are trying to say and it is easier to edit.

Anyway, you can find out for yourself by watching the video.