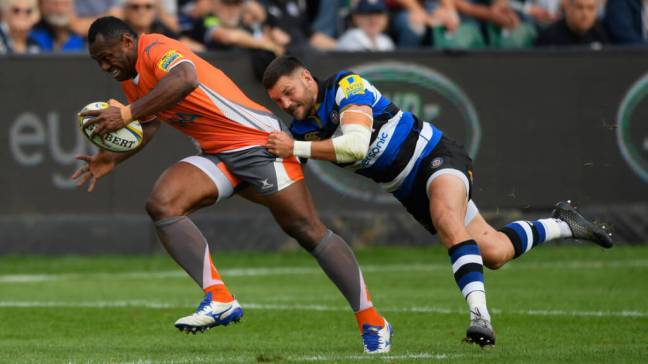 There are moments in life when I am reminded that there is decency in humanity. Unfortunately they are few and far between these days yet I experienced an event last week that gave me hope for human nature. It was at the rugby of all places.

I like going to Kingston Park to watch the Newcastle Falcons. I go a couple of times a season and on this occasion was with my son in law and my nephew. It was a family outing. Newcastle are riding high at the top of the league on their way, hopefully, back to the premiership.

For some reason, probably to do with the price of tickets, we always end up standing in the North East stand. Sometimes the action is very close and sometimes it is far away but there is a big screen in the corner behind us that we can look at when the players are at the opposite end of the pitch. We stand either facing the pitch or towards the screen depending upon the play.

I noticed though that there was a man standing in front of us with his back to the pitch. At first I thought it was to put his back to the wind which was blowing a gale and ruining Toby Floods attempts at kicking. It didn’t make sense to come to the match and face in the opposite direction.

After awhile I realised he was blind and wondered how he was able to enjoy the game when it is predominantly a visual spectacle. It was then that I realised that his friend standing next to him, and facing the pitch, was giving him a running commentary, who had the ball, who was tackling, how the play was going, a constant stream of information for his colleague. Every kick, scrunch and hand-off was dutifully passed on.

I have no idea how such an arrangement came about and I would never be so rude as to ask but their friendship struck me as a beautiful thing. As I write this now it brings a lump to my throat.

There is hope for all of us.